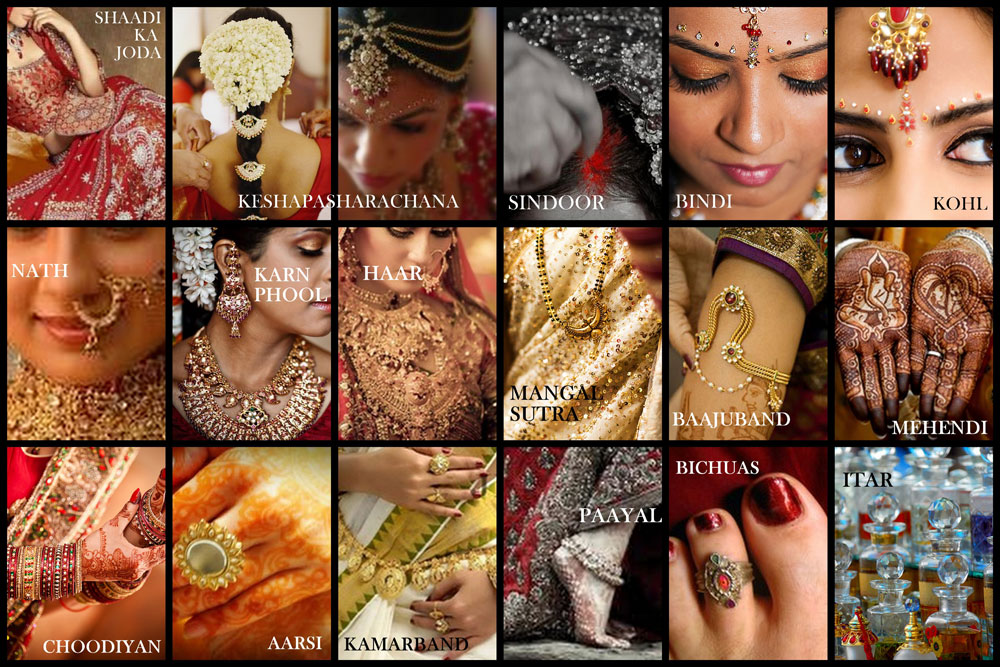 Wedding is deliberated to be the most important day in our Indian culture. The term “Solah Shringar” refers to sixteen adornments of a Hindu bride on her wedding day. In Hindu marriages, the beautification of the bride consist of sixteen parts and covers almost every part of the body right from head to the toe.

The tradition of using sixteen embellishments in the Solah Shringar was crafted to nullify the effect of the sixteen phases of the moon, which in turn was believed to be connected to a women’s menstrual cycle. For a married woman, Solah Shringar is not only a sign of saubhagya but it also does its bit in pleasing the Goddess of bounty – Mahalakshmi.

The Shringar starts with Shaadi ka Joda. Wedding dress or Joda is usually of bright colour, heavily embridered in golden thread. Wedding dresses varies from saree, salwar suit, lehenga,etc; rely on which part of India the bride’s family hails from.

It is an accessory worn on the central parting of the hair up to the forehead. The centre part of the forehead is believed to house the ajna chakra and it stands for preservation. There are different variations of Mangtikka. A Mangtikka with chains tied along the hairline is one kind, which highlights the brides face. The Mangtikka gives the bride a delicate and a beautiful look.

Sindoor or Vermillion is one of the important Indian wedding rituals. The bride Solah Shringar is considered to incomplete without Sindoor. It is applied on the central parting of the hair. The red vermillion powder symbolizes fertility and regenerative power of women. It is called Suhaag and is considered a sacred symbol. This red comestic mark (Sindoor) immensely enhance female beauty and grace.

Bindi is put on the centre of the bride’s forehead. The centre of the forehead is believed to be where the mystical third eye is and it represents fire. Bindi indicates that a woman is married.

Kajal is a black product drawn on the inner & outer rim of the bride’s eyelids, accentuating and highlighting her eyes.

Nath is one of the most traditional and ethnic accessories. Nose rings are a symbol of a married woman in so traditions and expected to be worn by married women all the time.

Karn Phool is a Sanskrit word meaning flower of the ear. Earrings adorns the ears of an Indian bride.

Necklaces are usaully made of gold and embellished with precious gems and stones, which beautify the bride. Haar or Necklaces are mostly heavy, with beautiful, elaborate designs.

Mangalsutra is usually made of black beads and gold, is put by the groom on the bride during the wedding ceremony. This symbolizes their marriage and is worn by the bride until her death.

Armbands are an emblem of beauty and worn on the arm of the bride, usually placed over the blouse. Armbands are mostly made of gold and by placing precious stones on it. It is believed that armbands keep evil away.

The bride’s hands and feet are decorated with intricate designs and patterns using mehendi paste, is normally applied on the day before the wedding. The mehendi colour imparted has several implications like strength, fertility, emotional bond, etc; and is considered auspicious. It is believed that darker the colour of Mehendi, deeper she’ll be adored and is also believed to protect one from evil spirits, diseases, misery and death.

Adoring bangles in the hands of the bride is another sign of a married woman. The bangles are made of gold, glass of green or red or any other metal. The new bride is not allowed to do any house chores till she removes these bangles.

Kalire is an important part of a north Indian wedding. It is an umbrella shaped hanging accessory which are tied with bangles and they should be worn even after the marriage. There is a traditional practice followed with kalire in every Punjabi and Sikh wedding. Kalire is usually in golden or silver colour.

It is an ornament tied around the waist. Kamarband is beautiful belt, made of gold with precious gems, which emphasize the waist of the bride. It also helps in holding the sari in place.

Paayal is a thick chain consisting of tiny bells which makes a beautiful, musical sound when the bride walks.

Bichuas or toe rings are worn on the second toe of the feet. It is also a symbol of married woman. The bride is expected to wear the toe rings until her husband’s death.

Itar is applied on the bride to keep her smelling nice. It also helps her stay fresh through the lengthy wedding rituals.

These Indian accessories reflect the rich culture and heritage of our country. Fashion comes and fades away, but there are some trends in the Indian society, which has still not changed nor will ever change in the upcoming eras.